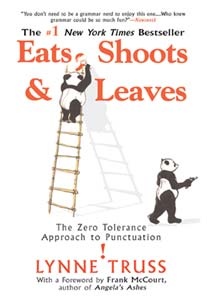 "A panda walks into a cafÚ. He orders a sandwich, eats it, then draws a gun and fires two shots in the air. 'Why?' asks the confused waiter, as the panda makes towards the exit. The panda produces a badly punctuated wildlife manual and tosses it over his shoulder. 'Iĺm a panda' he says at the door. 'Look it up.' The waiter turns to the relevant entry and, sure enough, finds an explanation. 'Panda. Large black-and-white bear-like mammal, native to China. Eats, shoots, and leaves.'"

Striking a balance between punctuation prescription and description, Trussĺs Eats, shoots and leaves is written with the voice of common sense pragmatism (The Zero Tolerance Approach), and as the title illustrates, with enough humor and wit to make even the most resistant and staunchest grammar-phobic smile.

"To the memory of the striking Bolshevik printers of St Petersburg who, in 1905, demanded to be paid the same rate for punctuation marks as for letters, and thereby directly precipitated the first Russian Revolution."

Blended with historical fact, youĺll find the following example (p.13), taken from County Schools exams in 1936, in the UK:

ôGetting your itses mixed up is the greatest solecism in the world of punctuation. No matter that you have a PhD and have read all of Henry James twice. If you still persist in writing, "Good food at it's best", you deserve to be struck by lightning, hacked up on the spot and buried in an unmarked grave.ö (p. 44)

"Assuming a sentence rises into the air with the initial capital letter and lands with a soft-ish bump at the full stop, the humble comma can keep the sentence aloft all right, like this, UP, for hours if necessary, UP, like this, UP, sort-of-bouncing, and then falling down, and then UP it goes again, assuming you have enough additional things to say, although in the end you may run out of ideas and then you have to roll along the ground with no commas at all until some sort of surface resistance takes over and you run out of steam anyway, and then eventually with the help of three dotsů you stop." (p.106)